We talk about attaining the work-life balance. All of us, we do. As a new mother, I talk a lot about getting a work-life balance when what I mean to say is a work-family balance. I want to be equal parts Marvelous Mommy and Manager Magnifique. Now more so than ever, as I approach the new year and prepare to go back to the corporate world.

My mind and heart been dwelling on a few chords of late. It’s like a typical Beatles song, where it’s one main melody supported by 4 main chords, or variations therein. My song’s about work-life balance, nyah-nyah-nyah. And the chords, they go something like this.

Chord 1 – The one about Lazy Australians

I’ve travelled back to Singapore twice this year to visit family. As with every trip, there’s always someone who will strike up the conversation about how different Australia is to Singapore. It’s a natural comparison – I’ve lived for a considerable time in both countries now. I’m “practically Australian” to many of my Singaporean friends and family. But my passport – and some parts of my outlook – are still very much Singaporean.

Anyhoo, for some reason this year, quite a few peers have owned up to the fact that they work 16-hour days. SIXTEEN HOURS. That’s basically work… and sleep, if you need 8 hours’ sleep. Okay, maybe some time for a bath, a chat, and a couple of meals. That’s a hamster’s life, except I think hamsters have more siestas under all that straw you line cages with.

And then the clincher – this same friend actually complained to me about how expensive Australian contractors are. How ridiculously high their hourly rates are in comparison, and how they have the audacity to refuse to work past certain times, or on certain dates.

Basically, how indolent and arrogant Australians were, compared to cheaper and more industrious nationalities.

I felt a variety of things at that rather large poke. Guilty that my country of origin was doing it tough for pitiful pay. Ashamed that I wasn’t working terrible hours like he was. Indignant that in lumping all Australians together, this friend had inadvertently labelled my Australian husband an overpriced, arrogant laggard.

That in the face of cheap labour from everywhere else, they’ve stuck to a belief that family, friends, life, isn’t worth the sacrifice. And that’s why the shops close at 5pm on weekdays. It’s an active, deliberate choice.

Australians are unhappy about their work-life balance. And then there’s that 2004 report by the Australia Institute that had claimed Australians work the longest hours out of all the developed nations in the world – even surpassing Japan. Yeah I know. I think that report’s suss, too.

More recently, there’s that rather mortifying Gallup survey which surmised that Singapore was the most emotionless nation IN THE WORLD. And from just glancing through Singaporean reactions online, many are inclined to agree and cite the increasingly ridiculous rat race as the main culprit.

Chord 3 – The one about getting some perspective, please

I keep another blog where I wax lyrical about mumsy things. Being a mum, loving being a mum, hey-isn’t-my-daughter cute mumsy things. Which means I make connections with a whole other bunch of people I otherwise wouldn’t have met through work.

So here I am, mooing now and then about not having enough time to do ALL the things I want to do with my only daughter while maintaining and growing a stupendous career. And then I read about this mother having to deal with her disabled daughter getting wrongfully arrested for assaulting a police officer with a “dangerous weapon” while she was having a psychiatric episode.

I doubt Linda has the luxury of time to even wail about her lack of work-life balance in the first place. Suddenly, whinging about the rat race feels very bourgeois.

Chord 4 – The one where it might all be a myth

I chanced upon this series of essays about work-life balance the other day, and came away with a few messages… chief of which is that maybe I’m asking the wrong question altogether.

Because the assumption inherent in the quest for work-life balance is that it will give you happiness.

And I rather suspect that the answer has all to do with the attitudes and baggage one brings along the journey, rather than the destination. That, and letting go of the fact that you don’t know what tomorrow brings. So why sweat it at all?

One Response to "Work-life balance: a 4-chord harmony" 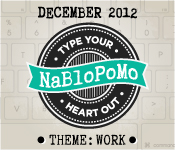